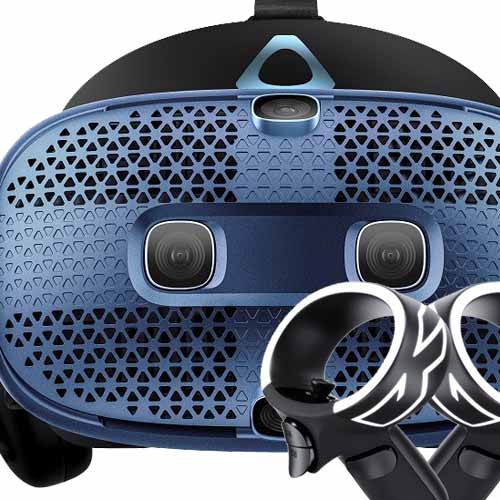 + Refundable Security Deposit of $199 per rental (not per item)

We ship nationwide with Courier Post, and include a prepaid return label to use at the end of your rental for returns.

The time spent in-transit is not counted out of your rental days.

Regular delivery requires a booking to be completed at least 3 business days before your rental will begin. However if you need equipment earlier, we have urgent shipping delivery which are also listed below.

As is usual for equipment rentals, we just need to take a single security deposit of $199. This is refunded to you by bank deposit as per our Terms and Conditions.

Providing you're renting as a New Zealand registered company, where the company is taking responsibility for the equipment, we do not require a security deposit.

▼ About the HTC Vive Cosmos

The Vive Cosmos has a higher resolution than even the Vive Pro, and uses an LCD screen instead of an OLED, meaning the visible resolution and clarity is much higher. The setup is also easier with no external sensors to worry about. Instead, six built-in cameras track your two controllers and your position in the room (a brightly lit room is essential!). Given the extreme tracking test that is Beat Saber, the external based sensor headsets and the Oculus camera based headsets do perform better, but the ease of plugging everything in, running the Vive setup and playing is really nice!

Plug the Cosmos into your desktop PC (or you can rent our PC if you need one) and plug the PC into your TV, and everyone else can see the action up on your TV. And if the person playing needs to see everyone else, they can simply flip up the front of the headset. The usual safety guardian border still applies here, letting you define a virtual boundary during the initial setup, helping to keep people safe. And if the user does walk beyond the boundary, the built-in cameras automatically show the user the real world instead of the game.

Compared to the Oculus Rift S, this has a higher resolution screen, physical IPD adjustment (changing the distance between the lenses to match your personal eyes), built-in headphones instead of built-in speakers, and runs at 90hz for a slightly smoother experience than the 80hz of the Rift S (although I believe you'd be hard pressed to notice that difference in that last point). Having said all that, we do still prefer the Oculus controllers for a slightly more comfortable gaming experience.

Details on how the rental works, comparisons of the different headsets, frequently asked questions and more, are all available in our Virtual Reality Rental Guide.

HTC offers a free download to check your PC's compatibility, this can be downloaded here: PC Check. Also SteamVR Performance Test is free and can be used to benchmark your PC, showing you how well it may run VR.

The minimum system requirements for the headset include:

Note: The Vive Cosmos is recommended for indoor use, and we cannot guarantee the tracking will work outdoors.

There's no minimum space requirement for the Vive Cosmos, however some content will work best with a minimum play area of 2 x 1.5 meters.

As the system uses six built-in cameras to track your position and the controllers, the ideal room would be:

Aside from the gear we provide, you may need a desktop PC. If you don't have a suitable PC, we also rent those. You just need a monitor or a TV with an HDMI input (almost any TV in the past 10 years, and most monitors).